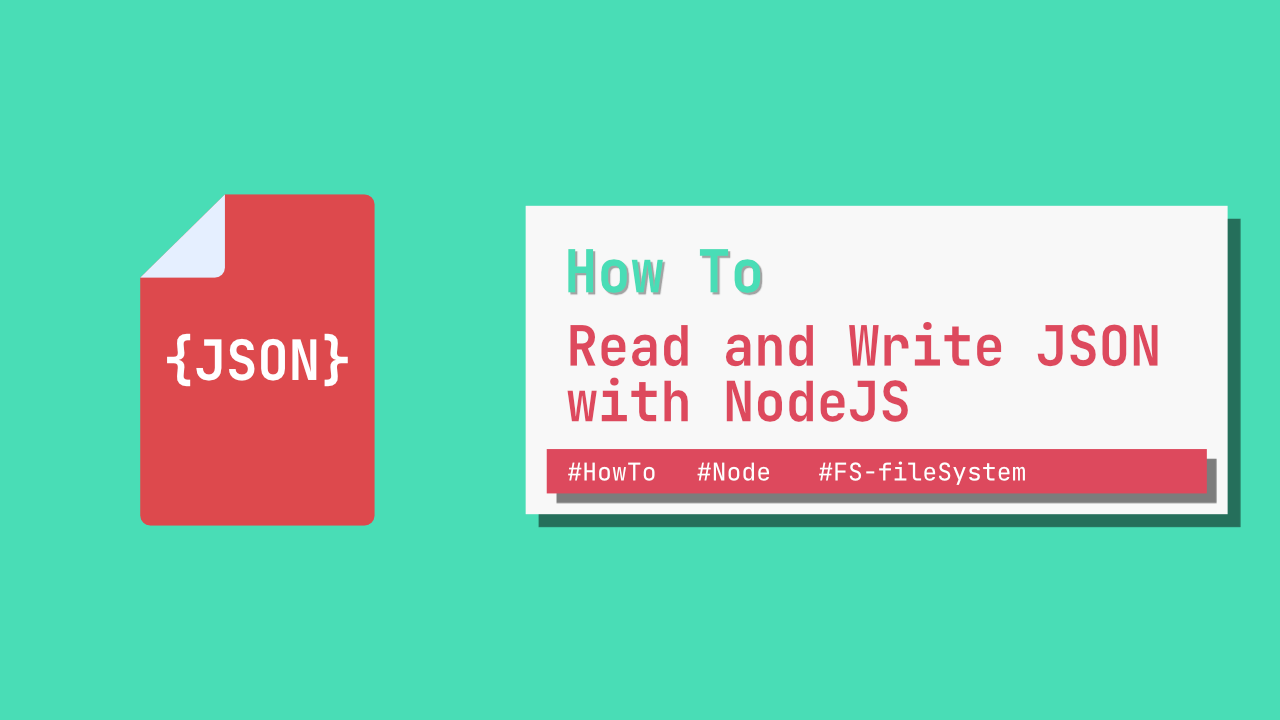 In this tutorial we will go over how read and write a JSON file with NodeJS. It should come at no surprise that Node makes working with JSON extremely easy, and with the built in fs module, reading and writing to the file system is equally easy.

Before we get started, this is the data that I am working with, and I have this in a file called testJsonFile.json which is in my root directory:

Now that we have the data setup, let's look at the first two lines of my index.js file:

On the first line, we require the fs module. We will need this to read and write to the file system and we will use this throughout the tutorial.

On the next line we setup a variable that we will use later to store the JSON data that has been read from the file system, we will then add an additional JavaScript framework to that data and then write it back to the file system.

The fs module provides a couple of popular ways to read a file, namely these are, readFile and readFileSync. We will use both of these functions, depending on your situation, reading a file synchronously might not be an issue at all, it also makes it a bit easier in my opinion as we don't need to deal with callbacks.

Reading a file with readFile

I am going to start with the code, and then I will explain it afterwards:

Ok, let's run through what is happening in the above code snippet:

And that is it! That is how simple it is to read a json file asynchronously using Node.

Reading a file with readFileSync

Once again, let's start with the code:

Most of the steps are quite similar to the asynchronous example, the big difference is the try catch.

As I have mentioned before, this is my preferred way to read files because it is so straight forward, but, making use of the readFileSync function heavily depends on what your use case is.

In the previous section we spoke about reading a file using the fs module. Writing to the file system also uses the fs module, and it too has two functions that we will use. Namely, writeFile and writeFileSync. This works in a similar way to the read functions.

Writing a file with writeFile

Let's start with the code:

That is all that is needed to write to a file asynchronously, just as easy, if not easier than reading a file.

Writing a file with writeFileSync

Starting with the code one again:

The original data in the testJsonFile.json looked like this:

After we write to it, it should look like this:

This tutorial was quite long, but the code itself is quite easy. Reading from a file and writing to a file synchronously is easier than asynchronously, simple because you do need the callback, and everything works as expected.

If you need to read the file asynchronously and then write to it afterwards, remember that you need to handle the writing from within callback, otherwise you could read a file, and while you are reading the file, the write could have already happened.

You can find all the source code here.

How to validate a URL with Node JS

Recently I needed to validate http links with Node. I thought this should be easy,

TLDR: If you are new to algorithms and data structures, I highly recommend Grokking Algorithms.